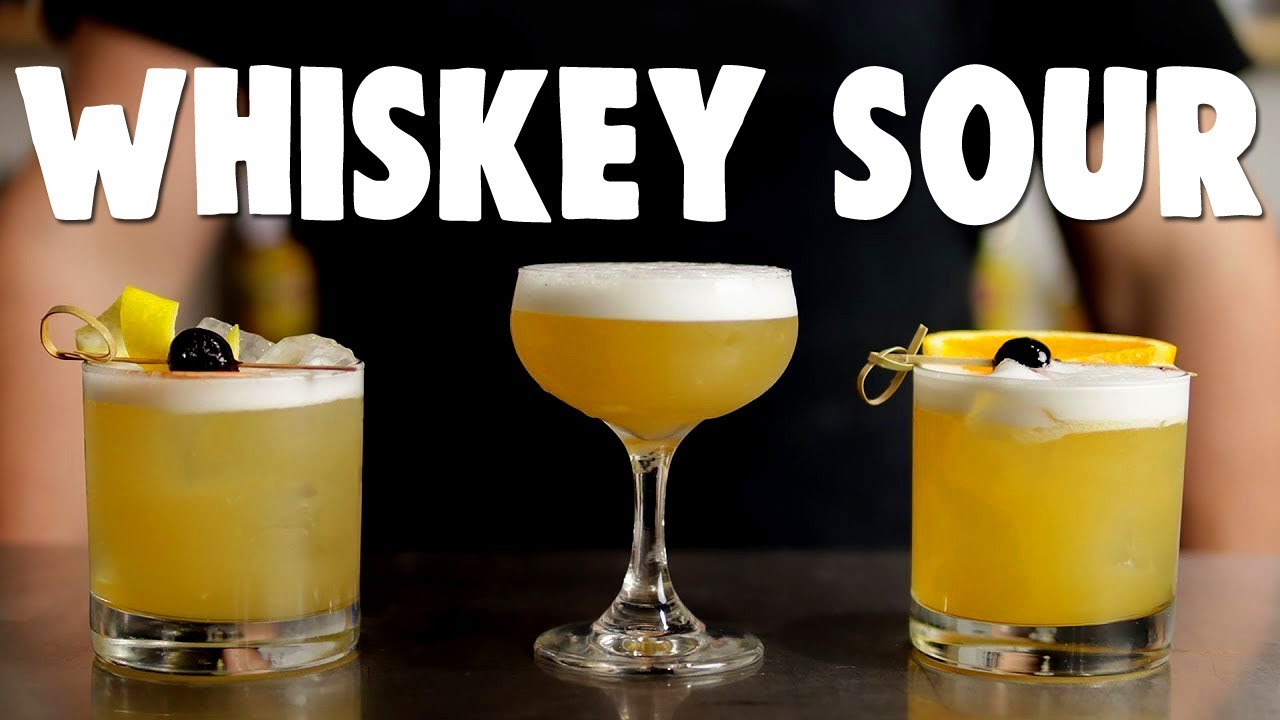 Cocktails
Share on Facebook
Share on Twitter
Share on Pinterest
Share on LinkedIn
Whiskey Sour – A Brief History: The whiskey sour was first seen in print in Jerry Thomas’ 1862 book The Bartender’s Guide (https://amzn.to/2BHARXW) but of course it had been around some time before Jerry’s book. Jerry’s recipe called for a wine glass of bourbon or rye, the juice of half a lemon and a large teaspoon of powdered white sugar dissolved in sparkling water. It was served in a claret glass and garnished with berries. The drink evolved and the egg white component was added later but is often referred to as optional.

Who says it’s the Best Whiskey Sour Recipe?
https://bit.ly/best-whiskey-sour
PunchDrink.com sought out the Ultimate Whiskey Sour recipe by inviting 17 of America’s best bartenders to submit their finest recipe for the Whiskey Sour—then blind-tasted them all to find the best of the best.

Nearly half of the drinks submitted were served on the rocks, and many called for the addition of an egg white.

The top 3 whiskey sour recipes shared several common attributes; they called for 60ml (2 ounces) of whiskey and made use of egg white for added texture. The top spot was taken out with a rye whiskey based sour that had the unorthodox addition of orange juice whilst my personal favourite took out the Bronze.

WHISKEY SOUR #3 (by Neal Bodenheimer) – https://bit.ly/whiskey-sour-03
Neal’s recipe is my personal favourite of the 3 finalists. Using a Bourbon Whiskey base makes it the sweeter of the 3 but boasts fragrant aromas from the mist of Angostura bitters which finishes off the drink nicely.

WHISKEY SOUR #2 (by Erik Adkins) – https://bit.ly/whiskey-sour-02
Erik’s recipe is slightly more acidic than the other 3 finalists, I felt that the balance was slightly off (personally). The recipe calls for a Bourbon Whiskey and is close to what would be referred to as a traditional Whiskey Sour.

WHISKEY SOUR #1 (by Dan Sabo) – https://bit.ly/whiskey-sour-01
Dan’s was a very close 2nd place in my books. It calls for a 100 proof Rye Whiskey along with higher portions of citrus and sweetener to retain balance of strong, sweet and sour. The unorthodox yet welcome addition of a small amount of orange juice contributed a sweet, softer acidic component.